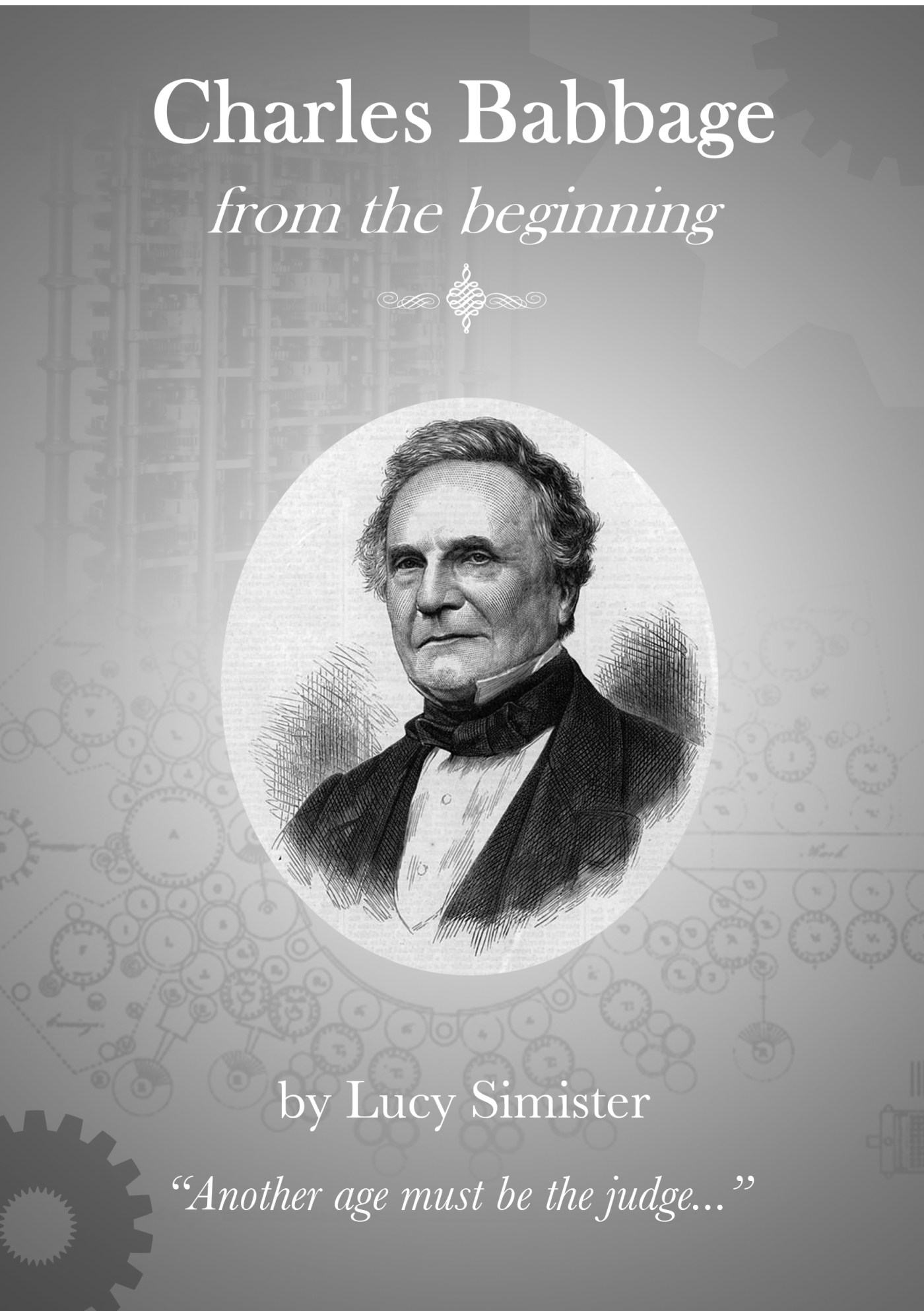 ‘Charles Babbage from the Beginning’ is a book in three parts.  Firstly it traces his Devon ancestors, where they lived

and who they were.  Part two is about his own life story and his family life, and part three about what inspired him to develop the computer, his work with Ada and the engineering beginnings of a computer.

Charles Babbage’s birthplace was said to be London – but was it?.  He was born on the 26th December in 1791 yet his birth was registered eleven days later when he was baptised at St Mary’s Church Newington on Friday 6th January 1792.  This was not the usual first Sunday after birth baptism registration … had the family been away from home?  Might he have been born somewhere else and then registered in London?  What researcher Anthony Hyman found puzzling on searching the baptismal records is that his birth year was recorded as 1792 which he claims has to be a clerical error.

Charles was indeed known to be reticent about declaring his actual place of birth which accounts in some part for the uncertainty, but in the 1891 census Charles filled in his place of birth as London. Why there is any uncertainty is puzzling.  His own son insisted he was born in Teignmouth and had documentary evidence to prove it.  In total there are supposedly seven documents referring to his place of birth; three say London, two say Totnes and two say Teignmouth.  His parents did have a house in Teignmouth and they were known to be constantly commuting between the three residences.

There is still much debate on the internet but to all intents and purposes Charles Babbage was a Devonian.  His Devon ancestors survived countless episodes of political and social unrest that make up the history of Devon.  It is also possible that a great grandmother of his was Queen Mary’s cousin, Juliana De Saye who was the first woman to welcome the then Princess Mary and Prince William when they arrived at Brixham.  A medal was presented to Charles’ relative and he said that it was still in the family.

Ancestry deeply interested Babbage and often the subject of conversation over dinner.  He started his own book ‘Passages from the life of a Philosopher’ with the quote ‘traced his descent through ages dark, from cats that caterwauled in Noah’s Ark.’

Was Charles’ efforts to build a computer intended to aid shipping into Teignmouth? He owned a yacht in the harbour. He had studied navigation and knew the calculations needed to get shipping in and out of the port. He also knew the logarithm table on which the calculations were based were appallingly inaccurate.  On board every ship was a person called the computer who was responsible for calculating tide times, wind speed and ships draft laden and in ballast, the ships position whilst on passage and other computations. Accurate calculations were essential.  Charles wrote ‘what a breakthrough the corrections of these tables would mean to the safety of tens of thousands of ships upon the ocean, the accuracy of the coast surveys, the exact position of lighthouses, and latitude and longitude of mid-sea islands, the course and motion of current direction and speed of winds, bearing and distance… in short everything which constitutes the chief elements of international commerce in modern times.’

Today Babbage is chiefly known as the grandfather of the computer.  However he was also a philosopher, geologist and naturalis – and even a politician – and took a keen interest in many other disciplines:

Charles also helped Isambard Kingdom Brunel get a job. Brunel was in dire straits having invested in a new factory for making shoes for the army.  Now the war was over and his saw mill business at Battersea was bankrupt.  Brunel had decided he needed a job and to concentrate on engineering.  He wrote to Babbage asking if he knew of any jobs going and Charles wrote back recommending him to work on the railways. He did not get that particular job but he got the next one and Charles acted as referee for him.  Brunel thanked him profusely for the opportunity he had given him, and how eternally grateful he was.  Many years and several railway projects later, Brunel wanted Babbage on board as consultant engineer – little knowing how close they would come to killing each other!

Brunel wanted to experiment on rail track stability so Babbage designed the equipment to do it.  It would mean stripping out a railway carriage for the experiment.  He also asked Brunel if he could borrow a train, as the tests were constantly hampered by all the stopping and starting of the train in normal service.  So an early morning run was arranged, (though it turned out to be far too early for the driver and the stoker who crashed into the shed on their return).  Charles then asked Brunel if he could have the train on Sunday. Brunel agreed,  though unofficially because it was the Sabbath. Charles then added 30 tons of ballast to test the train’s stability on the bends.

He was standing on the engines platform building up steam and preparing to leave the sidings when he thought he could see a faint trail of smoke in the distance. He was close to dismissing the possibility of it being another train as it was a Sunday, however minutes later a train came to a halt in front of him.

It was Brunel.  He had to get back from a night out in Bristol. Charles told him the collision would have killed them both and Brunel’s train would have turned over on impact as Babbage had the weight of 30 tons behind him.  What a different history would have unfolded without Brunel and Babbage.

His experiments led to the development of the ‘Black Box’ recorder, the Cowcatcher, which the American’s loved and we chose to ignore, as we did his occulting lights for lighthouses – which went to America where they perfected its engineering and became world leaders in this technology.  He invented the dynamometer and the first ever railway speedometer.

Ada Byron and Charles Babbage were co-workers on the Difference Engine. Together they drew up 30 sets of plans for its construction. She was the first person to write a paper on computer programming. She spent much of her life passionate about the computers development. She told Babbage that she envisaged one being able to write using it, display graphics and one day compose and play scientific music. She tragically died when she was 36

Charles Babbage changed the world – of that there is no doubt. His contribution to mathematics was immense; the building of the Difference Engine led to developments in engineering and industry. The Analytical Engine becoming the precursor of today’s computer, it was his vision and work that made it happen.

When Charles Babbage died on the 18th November 1871 the American press rushed through a second press newspaper headlining his death. Here there was a cursory acknowledgement: the government over the years had criticised his work on the computer – but they had very little understanding of what he was trying to achieve.

The motto he made when he was a young undergraduate with friends John Hershel, George Peacock, Edward Ryan and other students at Cambridge is one that truly applies to Charles Babbage… `Let’s leave this world a wiser one than we found it.’

I think that is fair to say he did just that. His achievement  was indeed much more than the computer.

Out now both in paperback and as a download with Amazon or from Totnes Information Office. Or direct from the publishers Moorside Publication

From Royal Fowey Y.C Dear Lucy On behalf of the Commodore and Members of the Royal Fowey Yacht Club we thank you very much for your fascinating talk about Charles Babbage. I think many of us had not realised just how influential and prolific he was. He knew and influenced so many people. Once again, thank you from all of us. It was a great pleasure to have you with us. Kind regards.

On behalf of the Commodore and Members of the Royal Fowey Yacht Club we thank you very much for your fascinating talk about Charles Babbage. I think many of us had not realised just how influential and prolific he was. He knew and influenced so many people.

Once again, thank you from all of us. It was a great pleasure to have you with us.